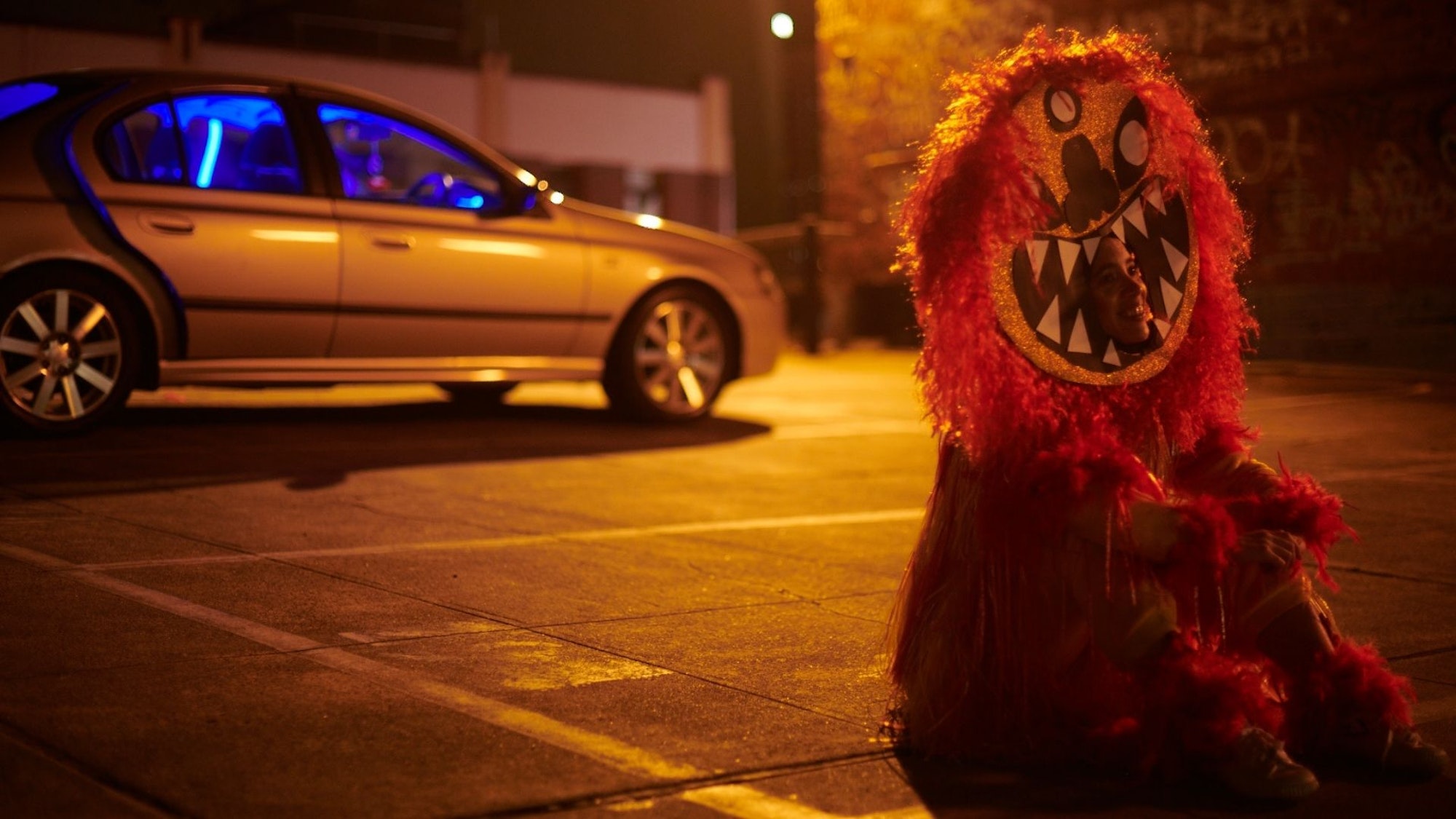 By This Lake - Lucy Bleach

Over the festival period, large blocks of ice are incrementally ‘parked’ on the top floor of Golden Square Car Park. The ice blocks are composed of frozen layers of water, sourced from both the Melbourne water supply via the tap, and inland lakes in Victoria. Comprising varying degrees of translucency, mineral content and suspended sediment, as the layers melt, a mingling of lacustrine and civic water leaches over the carpark and out into the city.

Frozen into the ice blocks, hydrophones capture the slowly cracking ice. The live sound is amplified through speakers installed in a nearby stairwell, enabling the transitioning ice forms to be encountered through different senses, at different times and in different spaces.

Embedded within each ice block, boulders of Harcourt granite lie latent in the frozen mass. Harcourt granite, recognised as valuable building material for the construction of colonial Melbourne, was quarried from Mount Alexander in the mid 1800’s, and features in many of Melbourne's civic buildings, including the original Stock Exchange and Parliament House. The boulders within the ice are the wastage from building blocks extracted from the quarry at this time, with many evidencing the chisel scars produced during the splitting process.

During the late Devonian period, a vast granite intrusion extended across Victoria and Tasmania (then a connected land mass), part of which resulted in the Harcourt granite batholith. The approximate time of the granite’s formation, 358,900 000 million years ago, has been translated as a sequence of slowly pulsing light wrapped around each frozen boulder, with the duration of each pulse reflecting the average length of a human breath. The light algorithm synthesises the time of the rock’s creation with the rhythm of human breathing, a kind of mingling of geologic and human vital registers.

By This Lake suggests implicit forces at play which are simultaneously still and mercurial, deep and diminishing. Inseparable and contradictory opposites. We are in the thrall of vanishing and enduring forms.

In Dja Dja Wurrung language Mount Alexander is known as Lanjanuc, named by the Jaara people. The artist acknowledges and pays respect to the Jaara as the ancestral and enduring custodians of Country from which the boulders were extracted at the time of colonisation.

The artist gratefully acknowledges the generous support from the following people and organisations:

Rocks Plus for the loan of the granite boulders

A 1971 Holden Monaro Coupe revs its engine, tires squeal and the smoke from burning rubber billows through Melbourne’s western suburbs. But the car’s decked out in hot metallic pink and there’s opera on the stereo. This is Initiation OA_RR, a new video work by celebrated visual artist Reko Rennie.

In this new RISING commission—the follow-up to his 2016 work OA_RR—Rennie cruises the working-class landscapes of his youth in Melbourne’s west. At an open tarmac, he puts the customised Monaro through a series of burnouts, referencing 'Westie’ drag-racing culture, First Peoples initiation practices in an urban context and the traditional sand engraving motifs of the Kamilaroi/Gamilaroi people.

"The work is a road trip going back to the suburb of my birth and relates to my experiences growing up in the 1970s and 80s working class western suburbs of inner Melbourne. I was born in an urban environment where traditional notions of initiation, were experienced in a completely different way to my ancestral home of the Kamilaroi/Gamilaroi people of North Western NSW." — Reko Rennie

Digital technology and science are completely shifting our ideas of self.

Lu Yang’s installation Power of Will—final shooting is a physical to digital (and back again) manifestation of the artists’ head.

Lu Yang’s ongoing practice of digital reconstruction reflects the myriad ways digital technology and science are shifting our ideas of self.

The New Sun incorporates a character of the Sun: a child-faced star with a beautiful voice. In its half-sung, poetic monologue, the Sun directs its lover, a human - and in an unsettling manner, presents a gloomy vision of a collapsing world.

The Sun’s dialogue is moody: shifting from elevated and emotionally charged confessions to the goofy stand-up comedy, ending up with an interpretation of “I got love”, a song from the 1970 musical Purlie. Whilst the film is dark, the song leaves a space for hope and marks the significance of words as tools of social responsibility.

The hamburger - the most powerful food object in the industrialized world, is displayed here as a levitating sculpture.

In The End the hamburger embodies the image of an Ukiyo-e (a genre of traditional Japanese art, the name for which translates as “image of the floating world”). Alongside it, an excerpt from a book about the modernization of Kuwait in the 1960s is read as a sound piece. The 1960s represent the high summer of American cultural expansion, the allure of which seems to have faded to the point of alienness.

The End highlights the precariousness of power, and its ability to fall from grace within seconds.

Commissioned by Gasworks (London) and the Sursock Museum (Beirut)

MISSION SURGE is a durational performance work that consists of two performers navigating a 4-meter long, transparent, double sit-on-top kayak around the Golden Square. The aquatic vessel is propped up on wheels, propelling the two fish out of water forward, exaggerating the tension and endurance of what it takes to work in tandem.

Affectionately nicknamed ‘the Divorce Boat’ the kayak functions as a symbol for collaboration, as it unveils the power dynamics between a working duo. In order to surge forward, the duo has to perform an equal effort of the same motions, surrendering individual ego to operate as one.

While this work looks closely at the mechanics of collaboration, it also aims to ask questions about relationship cliché’s and how to navigate queerness within in the context of the arts.

DEEP DOWN TIDAL delves into the political and technological impact of transoceanic communication networks.

From fibre optic cables to sunken cities, drowned bodies, histories of navigation and sacred signal transmissions - the sea is home to a complex web of communication streams.

As modern information and communication technologies (ICT) become omnipresent in Western lifestyles (rebranded global to further implement Western domination) we urgently need to understand the cultural, political, and environmental forces that have shaped them.

Submarine fibreoptic cables carrying our digital data run along colonial shipping routes. The bottom of the sea becomes the interface of painful yet celebrated advancements, masking the violent deeds of modernity. DEEP DOWN TIDAL navigates the ocean as a graveyard for Black knowledge and technologies.

From Atlantis to the ‘Middle passage’, or refuges drowning in the Mediterranean, the ocean abyss carries pains, lost histories and memories - while simultaneously providing the global infrastructure for our current telecommunications. Could the violence of the Internet - inflicted upon Africa and more generally Black people lie in its physical architecture?

Research suggests that water has the ability to memorize and copy information, disseminating it through its streams. What data is our world’s water holding? Beyond trauma, water holds a myriad of deep secrets; from its debated origin, its mysterious sea life of mermaids, water deities, and serpent gods, to the aquatic ape theory, and sacred water spirits celebrated in many cosmologies.

DEEP DOWN TIDAL uses the complex cosmological, spiritual, political and technological entangled narratives of the ocean as an interface to understand the legacies of colonialism.

The title of Patty Chang’s work Invocation for a Wandering Lake is a reference to Swedish explorer Sven Hedin’s eponymous book published in 1938, in which Hedin documents his search for a mysteriously transient body of water. In 2009, Chang travelled to the northwest province of Xinjiang, China, to find the lake known as Lop Nur for herself. Fraught with logistical challenges as well as political tension, her trip to this remote setting and the footage she filmed became the source material for the work Minor (2010). For eight subsequent years, Chang continued to chase water as both a physical force and metaphorical inspiration.

Invocation for a Wandering Lake depicts Chang washing the carcass of a beached sperm whale in Newfoundland in the eastern most point of North America, and the hull of a rusty ship washed ashore.

Acknowledgements - The Wandering Lake project was realized with grants to the artist from Creative Capital, Guggenheim Foundation, Headlands Centre for the Arts, Massachusetts Cultural Council, and New York Foundation for the Arts.

“Fogo Island is an old fishing island. Since the 1991 moratorium on cod, people do not fish for money there anymore. The lack of industry has be recently replaced with an attempt to create a new economy in the form of an art residency and art tourism, with the idea that one can lead with the arts and economy will follow.

The location is interesting to me because if you have read Cod a biography, you’ll know that the waters of Newfoundland is where the basque came to fish for cod in the 1400s. It was their secret fishing grounds that they didn’t want to tell anyone about because they were afraid others follow. But the new world would not be a secret for long. A few days before I arrived in Fogo, a dead sperm whale washed up to the shore. Actually the head was lodged onto some rocks but its body flowed freely with the waves. The weather was really bad for the entire first week I was there in the end of June. Rain and wind every day. The first clear day that came, I decided to walk across the island, we lived in the middle of the island, and I decided to walk 11 miles to the other end.

At the end of my walk I thought that I wanted to wash the dead whale. It was about 30 feetlong, probably a young male. Seeing it from the edge of the rocks and being in the water with it was a very different experience. I had never been in the water with such a large dead being before. I’d never seen anything so large and dead before. The sense of humanity was overwhelming. the sense of a sorrow or indescribable emptiness. Washing the body of the deceased is practice as a form of purifying the body to prepare it for the next stage. This ablution occurs in many religions, Judaism, Hinduism. It is a form of care and connecting while at the same time a letting go. The daily ritual of cleaning allows for a mourning or honouring in our everyday life."

Archival imagery and everyday footage are collaged into this film to question outcomes of colonisation and the survival of culture.

This version of INSERTS has been altered from the original, with a number of scenes removed.

A figure crawls on the street of Manila in a film made a year after the Edsa Revolution—the revolution that ended the 20-year presidency of Ferdinand Marcos.

This film is rumoured to have been the inspiration for the horror film The Ring.

'The man with no brain went to the hill full of flying brains. He tried to catch one flying brain but he didn't catch any. 'Why can't I catch a brain?' 'What must I do?'

Cartoon drawings, magazine clippings and found images collide in this meditation on the human condition.